We made the decision that in order to add sticker to our car’s state map, we had to actually do something in that state. Once again, with the help of the Roadtrippers app, we found a brand new (i.e. clean) hotel in Lincoln, Nebraska and a nearby Pioneer Museum.   Nebraska begins the states I have never actually been to. I mean, who goes to Nebraska unless its to visit a relative?! It is our drive-through state & so I made it a goal not to just skip it.  The museum was in the small town of Aurora, Nebraska.   It was locally funded and encompassed a large warehouse that took you through the history of the local residents. It began with Indian history and artifacts, moved on to the wagon trains, then to local Pioneer settlers and then to a larger early 1900’s settlement Main Street, to Victorian times, then through war memorabilia of locals who served in the Civil War, WWI, WWII, and Korea, finishing up with huge displays of local taxidermy animals. Out back, they had another warehouse of farm equipment and a blacksmithing shed. I just kept wishing my dad and father-in-law had been along. The museum had very little signage & I know they both would have been a huge help to explain some of the things we saw, especially the older planting equipment & techniques. The highlights were the reconstructed log cabin and the sod home, both of which were furnished as they would have been. We also saw a covered wagon, with all of the items they would have carried on their long trek. It was interesting what they took- European clocks, a piano, and any & every tool they might possibly need. I was in awe of how brave they must have been to travel to this new land, with so many unknowns and with the faith to start their life over again. Overall, it was a great pit stop in our long trek across Nebraska and a great reference point for the history book we were reading. 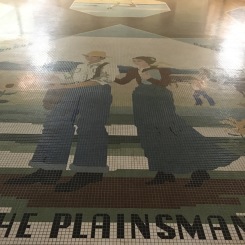 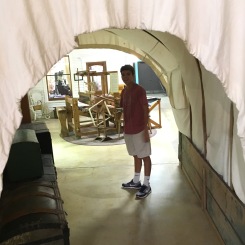 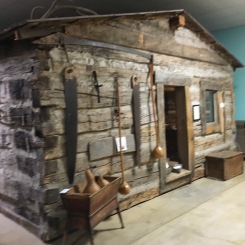 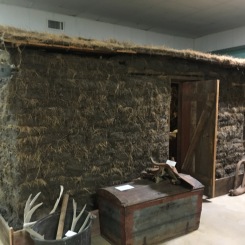 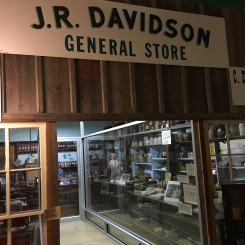 We knew Wall Drug , South Dakota was coming up, because for miles and miles of no speed limit highway, we had seen huge billboards telling us not to miss it & to make sure to get our free ice water.

I’m sure in the days before a Yeti cup, that was a definite allure. I, however, still had the same ice in my cup from the day before. I love my Yeti tumbler! So after a full day of driving, we heeded the call and went straight to Wall Drug. What a disappointment. It was covered with tourists, fresh from their charter buses, the food was a mediocre cafeteria, and the shops were filled with every type of souvenir you could label with Wall Drug or South Dakota. They had some older animatronics that I’m sure were a hit in 1950, but just seemed sad & dated now. We passed up the opportunity to buy a “genuine” jackelope, that Tom & Aidan swear are real & now they had the proof!

We had rented a log cabin nearby that was the perfect place for us to crash after a long day traveling and for Aidan to work on his science experiments.

The next morning, we left Wall, S.D & entered our first National Park, the Badlands from the nearby north entrance. This ended up being a great plan for us, as we were headed the opposite direction of most other park goers that day.

The Badlands are named such because they had no significant source or water, you could not plant well, the wind always blew & the extreme heat/cold made the area quite inhospitable. I had low expectations with the name Badlands.  Although it was a cloudy day, I thought the land was stunning. I could only imagine how beautiful the layered colors must be in the sunshine.   We saw buffalo grazing, goats, the Prairie Dog town where they chirp in warning, huge colorful canyons, plains and spiked outcroppings of rock. This entire area was carved of wind, not water, so the shapes were beautiful. Aidan completed the Junior Ranger program and we both learned about the unique erosion here, the fossils found and settlers’ attempts and fails at living here. 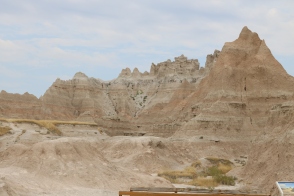 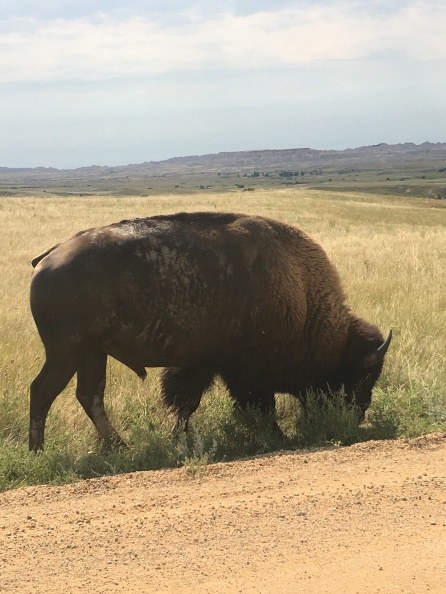 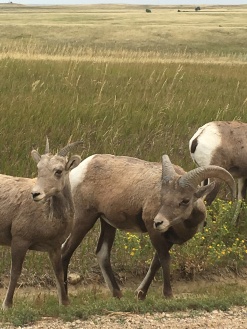 That afternoon, we traveled to Rapid City, South Dakota to find the local fly shop, which I have on good authority is how you know where the fish are biting & what flies to use to catch the big one. So far, I find them to be a great place to drop some cash very fast on very small items. On the advice of the fly shop owner, we headed a few blocks away in to the center of town to their city park. It was a great park and had a river running through it. Perfect for Aidan’s first catch of the trip! I guess that advice & those flies paid off.

We stayed the night in a lodge just two miles up the road from Mount Rushmore, which we could see from the balcony of the lodge. We met some locals who asked us not to share this, but South Dakota was beautiful, hospitable & one of our favorite places. I’m not sure what I expected, but it had exceeded things so far. More adventure to come as we wander and wonder…