“If history were taught in the form of stories, it would never be forgotten.” – Rudyard Kipling 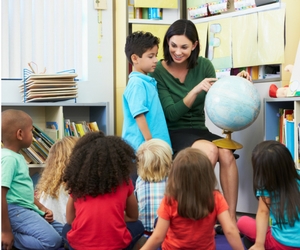 Here’s where I admit that I am a terrible history student. I have a horrible time remembering dates, places, and names. However, tell me a story, or let me read a novel and that “living” history will stick with me. This concept of experiencing history in context, with connotation, with connection to real people- living & past, through empathy, and with long-term retention is one of my primary goals for Aidan this year. To be honest, we’ve been gone just 2 weeks and I’ve learned or relearned so much about history, the people, our wars, the presidents and the human situation than I ever recall from school. I don’t mean to say I didn’t have excellent history teachers. I did. But reading a history textbook & listening to a lecture is just not the way I learn. It is my hope that experiencing our American history- the good & the bad- will be a lasting influence.

Our first stop on our trek was President Dwight D. Eisenhower’s Presidential Library in Abilene, Kansas. I had read online that if you were a Boy Scout and wore your uniform, you could get in free and participate in an education program to earn a special Eisenhower character badge, emphasizing such traits as preparation, knowledge, disposition and participation.   Upon arrival, we also signed up for a membership to and got a passport that could be stamped at all of the thirteen Presidential libraries that are managed by the National Archives. There are other Presidential libraries that are run by private organizations, such as the Lincoln Library, that we hope to visit as well.

The Eisenhower Library had a visitor center with a movie about his life, his boyhood home in Kansas (he’s really a Texan by birth), the burial place for him & his wife, a library & the museum. This was our first library, so I cannot compare, b

ut if they are all done this well, then I am impressed with my tax dollars at work and cannot wait to learn more. Eisenhower’s early adult years in the military were filled with quite menial tasks, certainly not the “excitement” of serving abroad in WWI that he sought. Yet, these years were crucial to the type of leader he would become, one who was deliberate, thoughtful, patient, organized, a good manager of resources and people, and a great visionary, with a strong moral compass. Given the current culture where many feel entitled to a “meaningful” first job and feeling certain tasks are beneath them, I was struck by how today’s leaders may not be well-equipped without this first step.

Although I knew this, the museum explained very well how Eisenhower planned D-Day for two years and he, alone, after consulting wise counsel, made the ultimate call to go ashore June 6, 1944. The museum had the table where they planed D-Day. I can only imagine all of the discussions, planning and arguments that took place around that table. After the war, he did not seek the presidency; it sought him. Interestingly enough, both the Republican and Democratic ticket wanted to “Like Ike” and have him as their candidate. Can you imagine that happening today?!  It all made me quite melancholy for a different kind of leader for this country than the choice we face this November.

While Aidan loved the WWII section, I was enthralled with Mamie- her hospitality, her clothes, her pearls, her generosity and her philosophy about the role of First Lady. Some of the things Eisenhower accomplished during his presidency- developing the interstate system (thank goodness!), school desegregation via the Supreme Court, sponsoring & signing the Civil Rights Bill of 1957 (though Congress weakened it), balancing the budget- 3 times, ending the Korean war, keeping the cold war from becoming an actual war, and establishing camp David (named after his grandson). 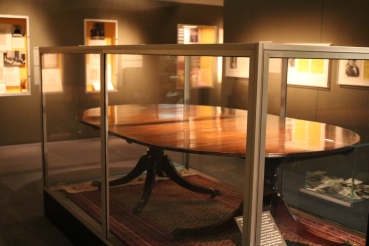 The roadtrippers app next led to me to our first National Park facility. We drove to Topeka, Kansas to the school where Oliver Brown and several other families filed a class action lawsuit in 1951 to oppose the segregation of the Topeka schools. They disputed the “separate but 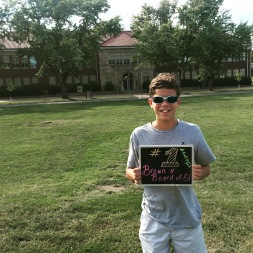 equal” education system in the U.S. Their children were required to walk 7 blocks to meet a school bus to ride & attend a school 2 miles away, while they lived in an integrated neighborhood and had a local school 6 blocks away, who refused their children admittance.   In 1953, five class action suits from across the country were grouped together, named Brown v. Board of Education and considered by the Supreme Court. Because the Brown vs. BoE is a National Historic Site, it is managed by the National Parks system. We had a great Ranger guide us around the museum and Aidan earned his first Junior Ranger badge. We also got our National Parks membership, which is good for a year and a Passport book to be stamped at each park as well.

At the time of the lawsuit, the typical southern white school spent $15 per student while a typical black school spent $1.71 per student. Black schools often had poorer facilities, larger class sizes, a lack of high schools, and fewer resources, such as books available. Topeka, Kansa was fairly progressive for the time period, in that their high school was already integrated, but the elementary and middle school, where primary learning & prejudices were formed, were not. The Brown vs. the Board of Education suit was heard by the Supreme Court in 1954 and the court unanimously decided “separate but equal” had no place in the field of public education. 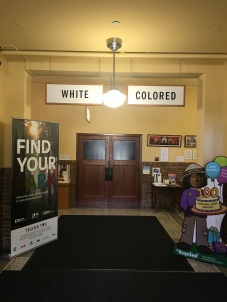 The museum was done very well. Upon entry, there were clearly painted signs of “white” and “colored”. Although this sign would not have been original to the school, since the school was only for black children, it still made a strong impact. They had a series of 5 videos explaining race relations starting with slavery, continuing to the Jim Crow Laws, and through the Civil Rights movement. The videos focused on not only the abhorrent oppression of the black U.S. community since the days of slavery, but also the resiliency and determination of the African-American people to gain freedom & rights that were God-given.

The unanimous Supreme Court decision of Brown v. BoE gave the Civil Rights Movement legitimacy & inspired the power to make more changes though the courts and communities. One of the most moving things was an exhibit with a small black doll. A study in South Carolina, which was used as evidence in the Supreme Court case, 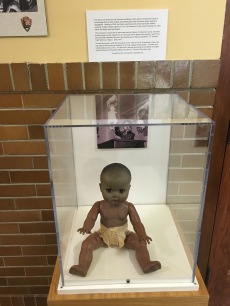 interviewed black children & presented a black baby doll and a white one. They asked the black children which doll was nice, which one was bad, which one they would like to play with and which looked like them. Overwhelmingly, the black children chose the white doll as having the positive attributes. It is heartbreaking how the systemic oppression and perceived lack of value were learned so early. I would find it interesting if this study were repeated today- with a variety of races. I realize the problems with today’s education aren’t exclusively funding, but I honestly believe our current school systems, although no longer legally separated by race, are still not equal in economics, resources, nor opportunities. While I see progress since 1954, I still think our schools are key to success & have a great deal to improve upon.

We had a lot to talk & think about after our first day!  It was clear, things are never simple to fix and an empowered person can truly have a positive impact on the future of our nation. More adventure to come as we wander and wonder…

One thought on “Don’t Know Much About History”