Knowledge is rooted in all things—the world is a library.- Lakota Proverb

To continue celebrating the 100-year event, we had a full day ahead- the goal was three parks, and 3 states to cover.

First, we headed to Jewel Cave National Monument, which was in nearby Custer, South Dakota. Typically, they give out the day’s passes for cave tours in the morning. My plan was to arrive early, get a pass for a tour of the Jewel Cave for later in the day and then drive over to Wind Cave to tour it as well. However, because the park admission was free & they anticipated big crowds, they were giving tour tickets for the next available tours only. There was a long line when we arrived and we were able to get tickets for the second tour of the day. We had about an hour to kill, so we checked out their museum on site and Aidan worked on the Junior Ranger Program.

Jewel Cave is the third longest cave in the world. It currently has 181 mapped miles of passageways.   It was discovered in 1900, when two brothers, Frank and Albert Michaud were prospecting, heard a whistle and felt cold air blowing out of a small hole in a canyon. After enlarging the opening with dynamite so they could enter it, they discovered a cave filled with crystals. They promptly found a lawyer and laid a mining claim to the cave, thinking they had found a valuable resource to mine. They were quickly disappointed to find that the cave was only filled with sparkly calcite crystals, which had no value. They still had plans to capitalize on their find, by blasting a wider opening, building walkways, naming the cave “Jewel Cave” and opening it to tourists. Although they were not successful in profiting from the cave, the land did get the attention of Theodore Roosevelt, who made it a National Monument in 1908 after the brothers sold the cave to the U.S. Government for $750.

When time came for our tour, we followed our Park Ranger for a long ride down the elevator. This was a great indicator of the 723 stairs to come. The cave is a year-round 49 degrees, which was about the same temperature as it was outdoors that morning.   We saw several types of formation of calcite crystals, cave popcorn, boxwork, stalagmites, flows of rock, and a long ribbon formation called the cave bacon. It was really pretty, but just too dark for my camera to take quality pictures. There was an impressive set of platforms and metal staircases and ramps to help us navigate. I honestly am not sure how they even got the equipment to even build the pathways into these tight spaces. Our tour lasted an hour and a half. 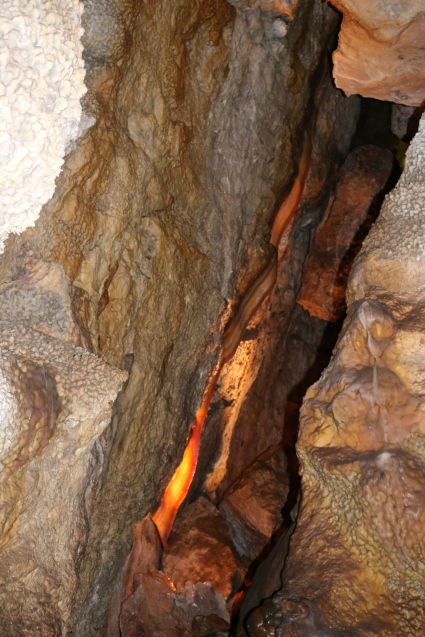 By this time, it was lunchtime. I presumed that the Wind Cave was similarly busy

and since it was 45 minutes in the opposite direction than we needed to ultimately go, we decided we had to skip it. We headed out of South Dakota & into Wyoming towards Devils Tower.   I honestly questioned the GPS, when we drove for hours & I saw nothing that would resemble the tower I had seen in pictures. Then, all of a sudden, we rounded a curve & there it was.

We followed a variety of RV’s and Harley’s towards the Tower, but stopped first in the prairies below to visit Prairie Dog town. These Prairie Dogs were not like the ones in The Badlands, these were completely uninhibited by us and fat! They did not chirp or bark in warning, but kept eating and running around. We also saw how destructive they could be, as they had made hole for their tunnels right through the asphalt. As we drove up to the base of Devils Tower, we realized a storm was blowing in. We grabbed the Junior Ranger packet to work on in the car and rode out the storm. 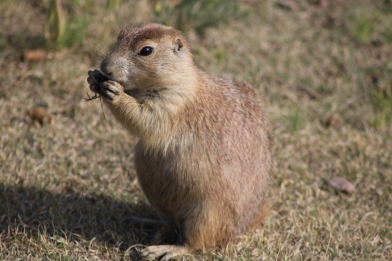 for it, including Bear’s Lodge, Bear’s Lair, Tree Rock, and Grizzly Bear Lodge. Most of these originate from legends regarding a giant bear attempting to climb the tower and leaving large claw marks down the sides. Devil’s Tower got its name after an expedition guide misinterpreted a Native American name to mean Bad God’s Tower. In 2005, there was a proposal to rename the Tower “Bear Lodge”, but this was met with opposition since many thought it would hurt the local tourism. This proposal was submitted again in 2014 with an additional request for the government to acknowledge the Devils Tower name is offensive to the Native Americans. This, again, was rejected. 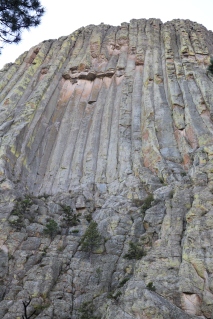 Devils Tower is 867 feet from summit to base.  There are several theories about how the large rock monolith came to be. Some believe a large explosive volcano was here & most was eroded away, leaving only this tower or neck of a volcano. Others believe that a tower is the remainder of a laccolith (magma trapped beneath the surface that pushed rock upward in to a dome, which cooled slowly) and didn’t surface, but eventually the surrounding sedimentary earth eroded, exposing it. It is clear that as the magma forming the tower cooled, it created hexagonal columns. Some of these columns cracked and fell, exposing a unique pattern around the edges.

The storm was fast-moving and cleared out a lot of the visitors, so we set out to circle the Tower. The views of the valley below were beautiful. There were several people climbing and repelling the various sides, which were interesting to watch.   The first persons to climb it were some local ranchers in 1893, using a system of wooden ladders. The first climber using modern techniques was Frits Weissner in 1937. In 1941, a man parachuted onto Devils Tower as a publicity stunt. He was trapped on the summit for 6 days, exposed to cold, rain and 50 mph winds, when his rope failed to land on the summit with him.   Supplies were dropped to him via a plane & a mountain rescue team eventually brought him down. Not withstanding this ill-conceived stunt, climbing the Tower has been met with opposition from many Native American tribes, who consider the Tower sacred land. They have asked that climbers refrain from climbing during the month of June due to holy celebrations. Most climbers respect this, but some have opposed the ban on climbing & taken their opposition to the courts, claiming Devils Tower is federal land. Clearly, the lack of respect for the Native Americans traditions and customs lives on.

As we left Wyoming and headed to North Dakota, we traveled through miles and miles of

National Grasslands. These prairie lands are protected by the U.S. Government, but are leased back to private individuals for specific uses, primarily for hunting, grazing, mineral extraction and recreational use. After driving for about an hour, seeing no towns, no homes and no other cars on the road from either direction, Aidan remarked “Where are all the people in this state?!” It was a strange feeling to see no one around, only cattle, sheep and buffalo. You almost felt like the Indians or wagons would come over the hills at any moment.

We played tag with the storm system that had passed us earlier, which was beautiful to behold and frightening to drive through. 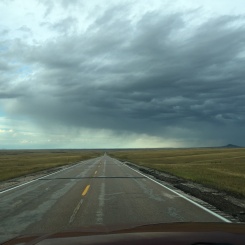 Just as the skies cleared, we saw a peach-colored sunset as we pulled into a very small town in North Dakota. It was after 8 pm and we were hungry & looking for a place to stop for a late dinner. As we pulled into the town, I notice the football field was lit up & the parking lot was full. We passed it up & quickly noticed that not one store, restaurant or shop was open in the small town, except Subway.  Even the Subway employees had the game playing over the radio in the store. It was a scene right out of Friday Night Lights. 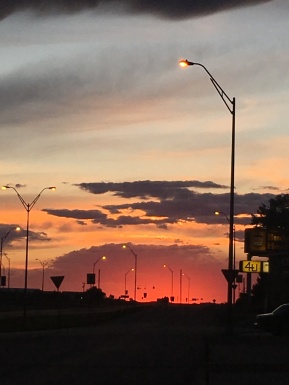 Late that night, we arrived in North Dakota and were met by the most gracious owner of the Eagle Ridge Lodge, a place I would come to love. More adventures to come as we wander and wonder…