“Everybody needs beauty as well as bread, places to play in and pray in, where nature may heal and give strength to body and soul.” -John Muir

Up until now, all of the parks we had visited could be seen in a few hours or a day. Yellowstone, I knew would be different. I was completely overwhelmed with the scope of the park. We had three days to see as much as we could before we flew home to see the college kids for Labor Day! I didn’t know where to start. 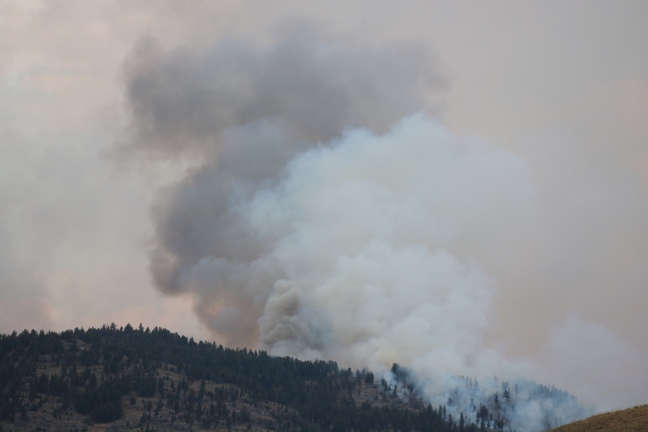 Add to that, two of the primary entrances to Yellowstone were closed or had delayed entry due to fires and not only did I have no plan of how to best see the park, I also found myself, again,with few lodging plans. The park was so large, the fires were unpredictable, and I wanted to maximize our time in the park while minimizing backtracking, so I was just going to plan our lodging one day at a time. I sent a request out to Facebook friends for Yellowstone guidance & they really came through!

After driving across Montana all day Monday, we arrived in Gardiner, which is at the north entrance of Yellowstone. Continuously, we had crisscrossed the Yellowstone River & at each turn off, Aidan had begged me to stop so he could fish. 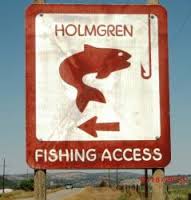 So naturally, our first stop in town was the local fly shop. Sadly, this is where we learned that it was a good thing we had not stopped. Days earlier, thousand of whitefish had ended up on the banks of Yellowstone River due to a parasite. All fishing north of the Park for 30 plus miles had been halted, as well as all water activities, such as rafting. They were unsure of how long it would take to eradicate the parasite; they were hoping by spring! The feelings were that the weather had been too warm and the river levels too low, causing the outbreak. It was a blow to the economy and the environment. We next made it to the local grocery store. Our lodging for that night at the Gateway Inn had a kitchen!! It was great to get to prepare and eat a meal at “home.”

The next day, we headed into the park early through the Roosevelt Arch. We drove to Mammoth Falls and the Visitor Center there. The Falls were not flowing, which made them look especially otherworldly. We quickly realized that Yellowstone was unlike any of our previous parks both in geology and in the crowds!  Yellowstone had a definite international draw. I couldn’t count the number of languages we heard spoken! We moved further in to the park to visit Norris Geyser Basin. There we saw our first steam vents, ethereal blue (boiling) waters, and a kaleidoscope of colored pools & geysers. Even the mud was boiling. You don’t see that everyday! No wonder people travel from all over the world to see such a place! 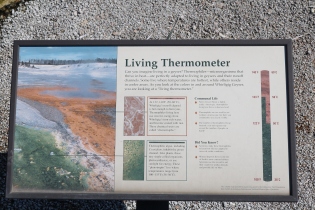 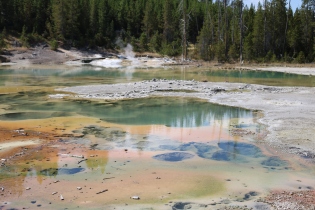 We next headed to see the iconic Falls. We were fortunate to see an osprey in it’s nest on a nearby cliff.  It was all just as beautiful as the paintings we had seen.

We ended our day in the park when I finally let Aidan fish the Yellowstone River.  He ventured down a steep cliff to the waters edge. I made sure he took his bear spray & posed with the sign- park #7! Alas, no fish were biting that afternoon.

We called it a day a little early, because I had made the mistake of entering the park without finalizing our hotel plans for the evening. I assumed I could do that when we took a break during the day. I was wrong- no cell service or wi-fi in Yellowstone! I even climbed to the top of a ridge, but no luck.   Because of the fires to the west and south, we headed back to the north entrance in Gardiner. While we sat at a restaurant by the river & waited for our dinner to arrive, I searched for a hotel. I couldn’t find one that with a vacancy that would fit my “I will not pay for lodging with less than 2 star rating” criteria. That is, I couldn’t find a hotel. I could find a tipi to rent. I was more than a little unsure since it had very few reviews, but what I read looked positive. We decided it was a TIPI, how could we not try it?!

We drove north of town and arrived at Dreamcatcher Tipi Hotel. We entered the reception tent filled with a precious store and were greeted by a familiar Texas twang.

Jill, her husband, Glen, and son, Trevor, had just opened the Dreamcatcher Tipis.  Trevor had the idea for the hotel, went in search of an investor, practiced his pitch on his parents, and then his dad bought all in before anyone else could have a part of the venture. They left Austin, moved an RV to the property for their “home,” while Trevor lives in a nearby tent and they dreamt big. They began building in the spring and after delays, finally opened in early August 2016.

The property consisted of the welcome tent, a bathhouse, a fire pit and 10 deluxe tipis. Each tipi sat on a concrete slab and was lined with a mosquito net. Ours was large enough to house two double beds, and a seating area. It felt very homey and luxurious with rugs, lamps, pillows and an electric fireplace.

The bathhouse, though not attached to the tipis, was stunning & worthy of the Four Seasons. The floor was heated, there were plush towels, yummy soap products, a powerful shower head, granite counter tops and huge portraits of Yellowstone wildlife on one wall. An attendant monitored the 8 bathrooms and quickly reset and cleaned them after each use. 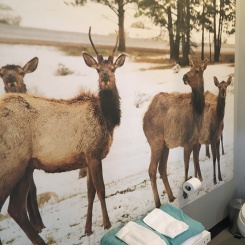 Because we had arrived early, we were the only guests on property.   For Aidan’s science curriculum, he had built a glider that he was supposed to test and adjust the wings for lift and distance. The large open acreage was perfect for this experiment! Glen was a retired engineer, so he helped with the lesson while their little white dog, Bebe, chased and barked at Aidan’s imminent threat. We enjoyed visiting with these dedicated owners and shared Texas stories while dreaming of where they should go to celebrate when the tipis closed for winter at the end of September. As night fell, we made our way to the circle of Adirondack chairs around the fire. We covered up with the blankets they had, and were treated to a s’mores bar and wine for me! We watched the deer roam freely by our tipis and the stars come out. 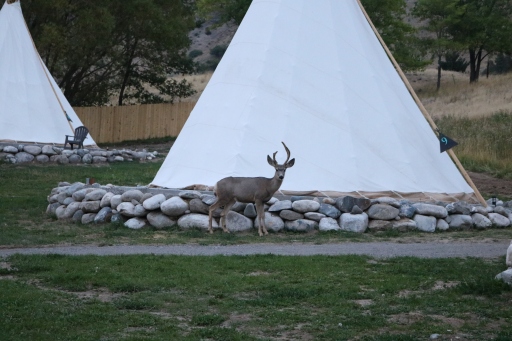 It was an amazing evening! We slept well in our deluxe tipi and awoke to a breakfast of locally baked goodies. As we set off for our day, Jill caught up with us to give us a dreamcatcher to remember our stay. As I said before, I love a good parting gift! Once again, I was so happy I had given unique lodging a shot and I was also sad I didn’t take more pictures, especially of our gracious hosts.  If you think you might head to Gardiner this next season, you can go their website http://www.dreeamcathertipihotel.vom and enter the friends & family code “happytipi” to receive 15% off your stay.  Make sure you tell them Kim & Aidan sent you! More adventures to come as we wander and wonder….