North Dakota was where I first learned my lesson in hotel supply & demand. Tom was going to join us for the weekend as we explored Roosevelt National Park. Earlier in the week, I had noted several hotels with vacancies in the town of Medora, North Dakota. However, when I went to book one, all the inns were full in a 30-mile radius. Clearly, the 100 anniversary weekend was going well for the National Parks. I rely heavily on reviews and rewards from Hotels.com and the TripAdvisor app when choosing where we will stay. The only place I could seem to find nearby was the Eagle Ridge Lodge.

Their website offered a few pictures and some info, but no ability to book online. I had called & left a couple messages, but hadn’t heard back. I wasn’t even sure this place was open anymore. TripAdvisor reviews were quite mixed, offering warnings of “no locks on the doors,”, “feels like its my aunt’s house,” “difficult to find,” “no dinner offered the night we arrived” and “no menu for meals,” I was wary, but desperate. After finally reaching the owner, Paul, he could not hear me & had to put his wife, Joann, on the phone to take our information. While we drove, he called to get our arrival time, tell us dinner 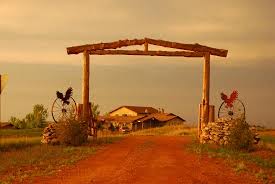 wouldn’t be served and give us detailed driving directions since the GPS directions would not help. When I told him we wouldn’t arrive until 9 p.m., he said he would stay up late to open the door for us. When I told him Tom wouldn’t arrive until 11, he told me I could just wait up & let him in when he arrived. That’s when I knew this was not going to be our typical lodging experience.

We arrived late, after driving down dark, muddy dirt roads. We had to call twice for directions and turned around at least 3 times, which in our family defines an “adventure.” Later, when I was left awake to coach Tom on his route,  I directed him to count cattle guards & described the landmarks of an arched entry with wagon wheels & deer antlers. Just like Texas, I thought.

Turns out, we were the only guests for the Saturday night.  I was unsure if this was a good thing, but it definitely made Aidan feel better, since, just as the reviewers said, there were no locks on the bedroom doors.  The Lodge had a wing for the owners, and a guest wing, with a large dining area, living area, porch and 5 rooms with their own en suite bathrooms that together, sleep 22. Our room was upstairs, with a King, Queen & a Double bed. Each room had its own fireplace, quilts made by Joann and much of the furniture made by Paul. Paul said this was all his wife’s vision. They had been ranchers in Montana. They chose to semi-retire and bought this amazing piece of land on the edge of the Badlands. She dreamt it. He built it. She handled the decorating. He planted the garden. She cooks. He grills. All, clearly, a labor of love & teamwork. In the winter, they host ladies retreats, scrapbooking weekends and quilting b’s. He keeps the many fireplaces going and these ladies share their snacks with him. Clearly, it works well for them. 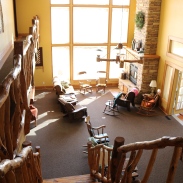 Breakfast was at 7 a.m. This was another online critique- some did not want to get up at a certain time for breakfast. This was the most delicious breakfast- fresh fruit, homemade breads, & a breakfast casserole.  I’m not a morning person, nor a breakfast person, but I would have woken up at whatever time they told me to if I could have that again! And- they did this just for us- no other guests! I could tell I would not be ready to leave this place anytime soon. 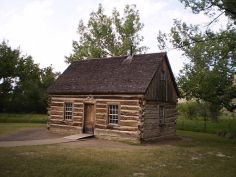 rew up in New York with a fascination with animals and the outdoors. At age 12, he submitted several of his own animals to the Smithsonian that he had caught and taxidermied. In 1884, Roosevelt’s wife and mother both died the same day, leaving him with his newborn daughter. To escape his grief, he headed to North Dakota, wanting to see the buffalo before they vanished. He fell in love with the land and ended up purchasing the Maltese Cross Ranch, which is now the park. Incidentally, Roosevelt NP is the only National Park named in honor of a person. After some brutal winters, Roosevelt’s ranching attempts failed miserably, causing him to lose a great deal of money and to

cease trying to raise cattle on the property. After returning to Washington D.C, Roosevelt entered political life and eventually became President in 1901 when McKinley was assassinated. In 1903, he wrote to naturalist John Muir and asked him to host him on a camping trip in Yosemite. Roosevelt missed the outdoor life and wanted to see about this land that Lincoln had first set aside as Federal Lands. Muir originally turned him down.

Historians now say this was the most important 3-day camping trip in the history of American public lands. When Roosevelt returned to D.C., he had a deep desire to protect and preserve our nation’s wilderness. He created 5 more National Parks, acres of National Forests, National Monuments & Historical Sites.

We drove through the winding roads of Roosevelt’s ranch, through deep canyons, rivers and forested land. These lands were also referenced to as the Badlands, as Roosevelt had discovered, they were not always hospitable. We saw turkeys, bison & prairie dogs as we drove through the park.  Once again, the prairie dogs showed how they can wreak havoc even through asphalt! 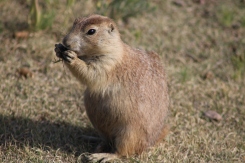 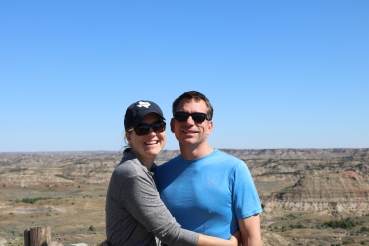 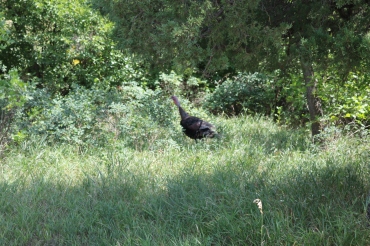 Tom & Aidan had plans to wilderness camp that night. After loading up their backpacks with water & dehydrated food, they set out across the river, which looked like chocolate milk. The sediment from the nearby formations washed into the river & was completely suspended in the water molecules. It looked muddy, but felt just like clear water. Science! The guys made their way up a trail to discover petrified wood & find a place on top of the canyon to camp for the night.

I returned to the Lodge to find 6 other guests had arrived. Two couples were from South Dakota & stopping through on their way to Canada. They were talkative & had fun personalities. As we sat on the porch overlooking the stunning late afternoon shadows on the canyon walls below, one of the guys was determined to coax the older couple, who was inside, to join us on the porch. When they came outside, they just stood awkwardly to the side of us, not sitting down. Someone asked where they were from & they said they were local, went to church with Paul & Joanna, and had just come for dinner. When asked if they did that often, the older gentleman, replied, “No. Actually we are here so I can ask this lovely lady if she will marry me.” He turned to her, and as she giggled, she replied yes. Now, I love a good proposal, but this was the best- they had each been married before, he for 65 years & she for 60 years. They were widowed two years prior and had found this new love. There was cheering & crying all around! I truly regret not snapping a few pictures, but we were all so caught up in this sacred moment that it just slipped my mind. We celebrated with a meal that rivals some of the best I’ve ever had- a steak from the neighbor’s ranch, corn, green bean, tomatoes, salad & potatoes picked that day from the garden & an amazing cobbler.

After dinner, I took a chair out to the nearby ridge so I could watch the sun go down to try to learn how to use this camera of mine. Tom & Aidan were doing the same a few miles away & we swapped glorious sunset selfies as the day ended. 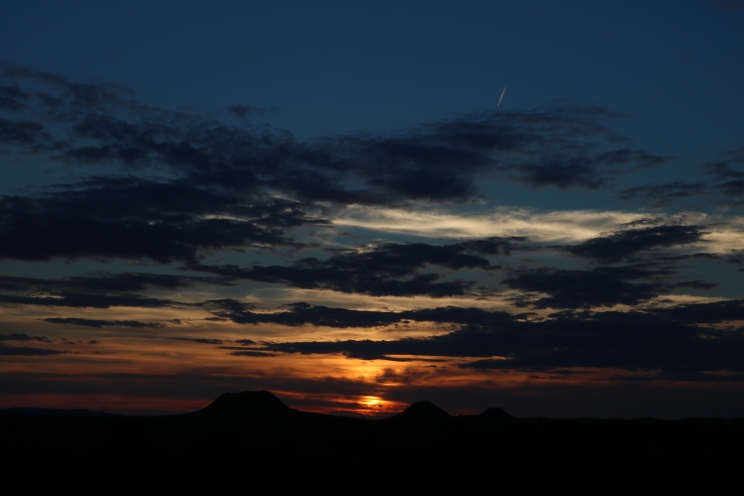 The next morning, I had another amazing breakfast & said farewell to these people who embodied the gift of hospitality. Their home, their food and their gift of relationship are truly a ministry & they do it well! I had learned my lesson about reviews as well – some people are happy being unhappy, are difficult to please and taking a risk can really pay off with big rewards.

I picked up my boys to hear about their overnight adventures. I wasn’t prepared to hear about the 1 a.m. coyote party outside their tent that night. I was glad they knew how to keep their food & themselves safe!

We drove to the northern side of Roosevelt Park, and met a fascinating Park Ranger. He was a local rancher as well. He had served as a Ranger since graduating college 35 years earlier & had always been at Roosevelt NP. In 20 minutes, we learned so much. He showed us how the glaciers had cut through the land so long ago, how you could see their evidence in the rocks left behind and the canyon shape. He taught us to always ask a Ranger, “What is missing from this Park?” As for Roosevelt NP, he said the grizzly bears and wolves were missing- good news for local ranchers, bad news for the park. He said a healthy park needs predators. There were 2 older buffalo currently dying of thirst, a terrible, long-suffering way to die. The availability of water wasn’t the problem, nor the accessibility. Simply put, the buffalo were frail. They could no longer walk. The Rangers were not allowed to interfere with the wildlife, according to laws by Congress, so these animals die a slow death with no natural predators. Capturing this Park Ranger on camera was another pic I regret not snapping. He was straight out of an old Western, complete with his straw cowboy hat- not typical for a Park Ranger, but I got the feeling his hat wasn’t his only nonconformist statement.

As the day ended, Tom headed east to Billings to fly home and we headed west towards Montana. More adventure to come as we wander and wonder…

2 thoughts on “Legacy of Love”